On Tuesday, August 21, 2018, my 41-year-old brother Brian Logal called me as he was going about his workday as a landscaper. He’d been complaining all summer about extreme fatigue and how the heat and work of the season were affecting him more than it usual. This day, however, was different. His eyes had been bothering him off and on since Sunday. He felt like he was having a hard time focusing. He chalked it up to tiredness, but on this day, my brother, who hadn’t been to a medical professional since childhood, knew he had to go to the doctor. He ended work early and made his way to an urgent care center. An hour later, my phone rang. Could I come and take him to the ER? The urgent care doctor wanted to call an ambulance because he thought he needed a CAT scan, and he’d rather walk into the hospital under his own steam. I dropped the dinner I was making and raced to him. The doctor urged me to go to the closest emergency room – not wasting time driving to the neighboring town. “Don’t call dad,” he cautioned. Brian had a long tradition of handling his problems on his own, and this was not going to be any different.

A few hours later, the ER doctor explained that there was something in his head that was pressing on his optic nerve. He couldn’t say what it was – a tumor was possible, but it could be an infection or something else. An MRI would be needed, but first he was going to be admitted. We reached out to our brother Adam. Adam works for a healthcare company and could help navigate Brian through this unfamiliar territory. Adam said he was on his way, and we reached out to our sister Colleen, parents Nancy and Nelson, and Brian’s girlfriend Sara who was finishing up her shift at a restaurant. While we waited, Brian walked outside the hospital to smoke what would become his last cigarette. I’m sure he thought about calling a cab and getting away from this place, and from this situation. What was ahead, however, could not be managed alone. Adam arrived quickly, and Sara a few hours later. We got him settled, and Adam and I headed home around 1:30 a.m. The entire family, including Adam’s wife Kelly and my husband Scott was at his bedside by 7 the next morning, and we spent all but a few sleeping hours there for the next week. A series of tests and parade of doctors who couldn’t look Brian in the eye or even shake his hand took place over the next several days. The prognosis was grim. Extremely advanced kidney cancer affecting not only his kidney and his head, but his liver, longs, vertebrae, femur, ribs, shoulder, lymph nodes. “Plan a cruise,” the on-call oncologist told my mother. “Take the whole family. The end will come quickly and painfully.” Brian might not last until his November birthday.

To say our world was turned upside down would be an understatement. My 72-year-old father filled in for Brian’s demanding job. My sister and brother took days off work. Sara struggled to balance her work and her role as his primary caretaker. My mother did not leave Brian’s side, feeding him, listening to him talk, trying remedies to soothe the tremendous headache and crippling body pain he was experiencing. Our father walked his dogs and kept his business afloat and sat at his bedside. Adam bought him furniture better suited to his physical needs. Kelly rearranged his bedroom and freshened up his space and researched endlessly. Scott gathered paperwork and made arrangements to help my father keep the business going, and held down our own homehold so I could be with Brian. Sara gave him a cane and a walker and lifted him out of bed when he was in too much pain to do it alone. And she gave him the reason to keep fighting. I listened to his worries and helped him plan for a future that didn’t include him. Colleen brought him meals and spent the night so the two could stay up late watching movies and stand-up comedy to escape what was on everyone’s mind: how few months, days, minutes we might have with Brian. Through Adam’s business connections, we found a doctor — a leading expert in the field of kidney cancer, Dr. Jaimie Merchan. He requested an urgent appointment and thankfully a space was available. Dr. Merchan’s staff seemed surprised by the entourage that accompanied Brian to that first appointment in September. I furiously took notes and Dr. Merchan and his staff reviewed Brian’s scans and biopsies. Dr. Merchan spoke plainly: Brian’s situation was grim. He had stage IV kidney cancer with a poor prognosis. Left untreated, he would succumb quickly. “Don’t give up just yet,” Dr. Merchan advised, however. There are options other than sitting and waiting for death to find you. He carefully explained historic treatments for advanced kidney cancer and its meager success rate. He described a new treatment recently made available as the standard for care that was having moderate successes — and in some cases, remarkable successes. He described a clinical trial for which Brian would qualify that had the potential for a very high efficacy. The family was to go home and consider the path to take — and independent of discussion, we all settled on the same treatment preferance, but waited for Brian to draw his own conclusion. He settled on the same one the rest of us. After several diagnostic procedures, the treatment finally began in late September.

Amazingly, within weeks, Brian began to notice little changes in his body. A mole shrank in size. His pain level diminished drastically. He could get out of bed without help. His functionality improved. And we all crossed our fingers and prayed that a miracle had begun. The doctors who developed this treatment plan were awarded the Nobel Prize for Medicine in October, just weeks after Brian’s treatment began. In the shadows, another remarkable effort was taking place.

Brian has dozens of friends that he’s kept in touch with through all of his walks of life — from high school, from his football playing days, from his early professional years, through his passion as a fisherman. He also has an enormous extended family — 17 aunts and uncles, plus their spouses. Scores of first cousins (more than 50) and their children number more than 100. Every one of these people reached out to tell Brian they had his back. They prayed for him. They stopped in for a visit. They supported a crowd-fundraiser to meet Brian’s out of pocket medical and living expenses. They printed t-shirts and photographed themselves wearing them. #TeamBrian and #LogalStrong became a way of life for Brian’s friends and family. The photos pouring in across social media were overwhelming for the immediate family here in Florida. Brian had a hard time knowing what to make of this support. He didn’t know why so many people were stepping up – and he felt awkward accepting their support. He didn’t want his friends’ money. He didn’t want people to take time away from their responsibilities. He didn’t want people to have to cook him food or do his laundry. I tried to counsel him that in the absence of being able to fix his health, these people who cared about him were trying to show their support in any way they could. Several out of town friends and relatives came into town for a quick visit. My dad’s brothers and several cousins traveled together about a month after Brian’s treatment began, as ambassadors of Team Brian, to personally deliver the support that distant family was lending to him.

As days carried on, Brian’s medical reports were becoming less bleak. Dr. Merchan was, at first, cautiously optomistic that Brian was responding to treatment. First scans indicated a recession of the disease in many of his organ systems. His pain levels diminished. He became more sure footed as the femur fracture the disease had caused healed. His vision improved and headaches began to fade. His first bone scan showed resolution of tumors that had previously been described as “innumerable” or too many to count. His organ function remained strong throughout his illness and his treatment. He had virtually no side effects to treatment — and only one, an allergic reaction to contrast used in a CT scan — during the entire course of his care to this point. Dr. Merchan dropped the “cautiously” from his “optimistic” evaluation of Brian’s treatment. A few months later, he used the term “remarkable” to describe his response. The family agreed, we had front row seats to a miracle unfolding. Now, almost two years in, Brian is anticipating a nephrectomy of his diseased kidney — the next step in his condition which was inoperable at diagnosis. He has few complaints and has resumed almost all of his normal life. The family is back to their routines and bedside vigils are, thankfully, something of the past.

What endures? Hope. Love. Support. Belief. The physical and figurative arms that encircled Brian and his family through this journey augmented Dr. Merchan’s medical care. Spreading the burden across many shoulders is absolutely an essential component of Brian’s journey through kidney cancer. For me, to see my brother attending a symposium and reaching out to tell his story to those in a different a place in their journey bolsters my spirit. Paying forward the many levels of generosity first paid to my family is a mission. No one of us is in this life alone. And as a community, we can handle whatever lies ahead. 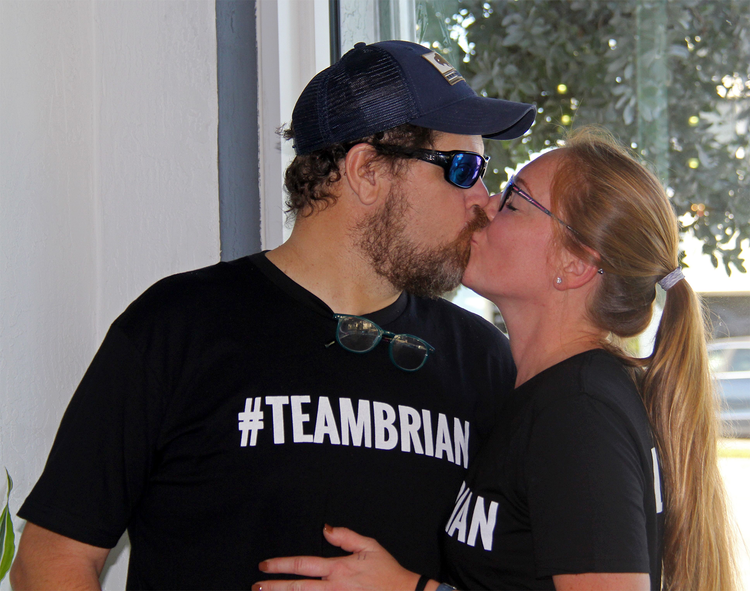