The story of Nick and Judy Nicholson ’62 story began in Hampton, Virginia, when Judy – a cheerleader – caught football player Nick’s eye. She was 14; he was 16. They dated through Nick’s years at VMI and married when he was 21 and she was 19. They were married for 47 years, had two children, 10 grandchildren and one great-grandson.

The Nicholsons anticipated spending many more years together, but their lives were abruptly interrupted Feb. 27, 2008, when Judy fainted. The event was unusual for Judy, who had no chronic health conditions. The couple’s son-in-law, a physician who was working at the local Mayo Clinic in Jacksonville, Florida, was able to quickly schedule a doctor appointment for Judy. The doctor visit returned an overwhelming diagnosis: Judy had renal cell carcinoma, commonly known as kidney cancer.

By March 2008, Judy had surgery to remove her right kidney. During the surgery, medical professionals found that the cancer had spread to other areas. “We were hopeful. She went on chemotherapy,” Nick remembered, but the disease was relentless. “In August, it returned with a vengeance.” The cancer had spread to Judy’s spinal column, requiring a second surgery to replace vertebrae damaged by the cancer. Judy was paralyzed after the second surgery, leaving the active, successful woman bedridden “from then on,” Nick said. Judy died Oct. 11, 2009.

“When it became very apparent that she wasn’t going to live, we talked,” Nick said. Cancer is always overwhelming, but kidney cancer lacks the support of other, more publicized cancers. “There was no patient support group, there was no outreach to anybody who had kidney cancer.” The Nicholsons were able to speak with Judy’s doctors, but privacy regulations limit information doctors can pass on to patients.

“[Doctors] could tell you what the hospital tells them to say, but they can’t – if they have other patients [with kidney cancer] – they just can’t tell you who they are or have you go talk to them. The only way to do this, as we ultimately found out, was through a volunteer patient support group,” Nick remembered. “We had had so many tears and anguish and bad times with Judy’s disease … just the awfulness of it. There was no one to talk to, ever. So we wanted to form a group – a foundation – that could hopefully save other people from having to go through what we did.” 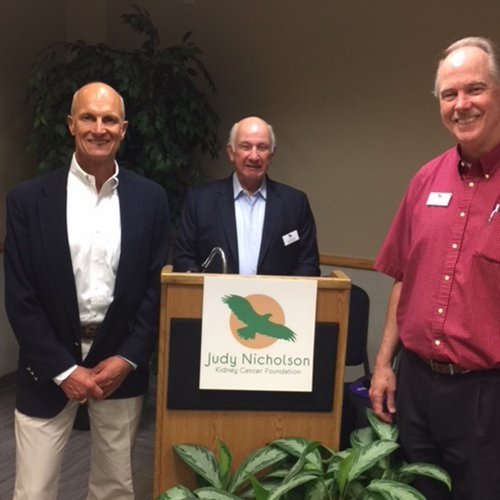